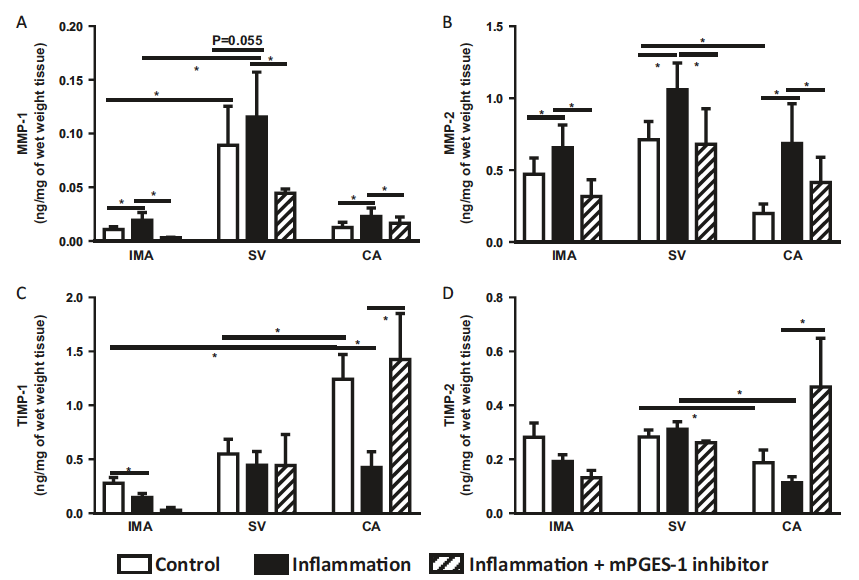 BACKGROUND AND OBJECTIVES: Matrix metalloproteinases (MMPs) are involved in several inflammatory processes including obesity-related vascular diseases and graft failure of coronary artery (CA) bypass grafts [internal mammary artery (IMA), saphenous vein (SV)]. In these inflammatory conditions, the release of prostaglandin E2 (PGE2) is increased via the activity of inducible microsomal PGE synthase-1 (mPGES-1). Our aim was to investigate whether MMPs and their endogenous inhibitor (TIMPs) may be regulated by PGE2 under inflammatory conditions in human vasculature and perivascular adipose tissue (PVAT), as well as in plasma of obese patients.

METHODS: MMP-1,-2 and TIMP-1,-2 densities were measured in human plasma (n = 68) as well as in supernatants of human vascular wall (IMA n = 16, SV n = 14, CA n = 13) and their PVAT. The effects of inflammation and mPGES-1 inhibitor (Compound III, 10 microM) on MMPs regulation were evaluated. The correlations between PGE2 and several parameters were calculated in plasma from patients with or without obesity.

RESULTS: The vascular wall and PVAT from SV exhibited the greatest MMP-1,-2 release. An increase of MMP-1,-2 and/or a decrease of TIMP-1 quantities have been detected under inflammation only in vascular wall not in PVAT. These changes under inflammation were completely reversed by inhibition of mPGES-1. In obesity, C-reactive protein (CRP), biomarker of inflammation, and PGE2 levels were increased. PGE2 contents were positively correlated with some anthropometric parameters and plasmatic CRP in both genders, while the correlation with the plasmatic MMP-1 density was significant only in women.

CONCLUSIONS: The greater MMP activity observed in SV may contribute to the increased prevalence of graft failure. Under inflammation, the greater mPGES-1 and PGE2 levels lead to enhanced MMP activity in human vascular walls. The positive association between PGE2 and MMP-1 or CRP has been observed in plasma of women. We suggest that mPGES-1 inhibitors could prevent graft failure and obesity-related vascular remodeling mostly in women.