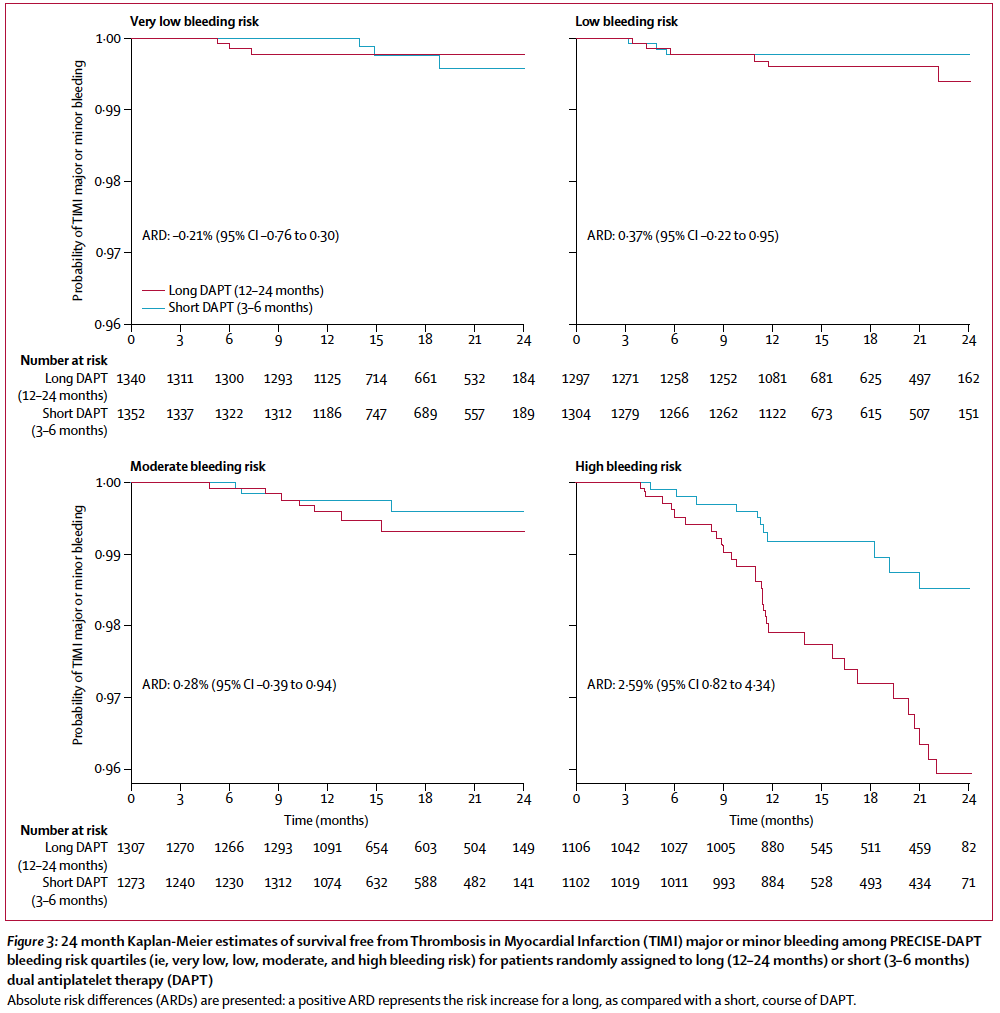 BACKGROUND: Dual antiplatelet therapy (DAPT) with aspirin plus a P2Y12 inhibitor prevents ischaemic events after coronary stenting, but increases bleeding. Guidelines support weighting bleeding risk before the selection of treatment duration, but no standardised tool exists for this purpose.

METHODS: A total of 14 963 patients treated with DAPT after coronary stenting-largely consisting of aspirin and clopidogrel and without indication to oral anticoagulation-were pooled at a single-patient level from eight multicentre randomised clinical trials with independent adjudication of events. Using Cox proportional hazards regression, we identified predictors of out-of-hospital Thrombosis in Myocardial Infarction (TIMI) major or minor bleeding stratified by trial, and developed a numerical bleeding risk score. The predictive performance of the novel score was assessed in the derivation cohort and validated in patients treated with percutaneous coronary intervention from the PLATelet inhibition and patient Outcomes (PLATO) trial (n=8595) and BernPCI registry (n=6172). The novel score was assessed within patients randomised to different DAPT durations (n=10 081) to identify the effect on bleeding and ischaemia of a long (12-24 months) or short (3-6 months) treatment in relation to baseline bleeding risk.

FINDINGS: The PRECISE-DAPT score (age, creatinine clearance, haemoglobin, white-blood-cell count, and previous spontaneous bleeding) showed a c-index for out-of-hospital TIMI major or minor bleeding of 0.73 (95% CI 0.61-0.85) in the derivation cohort, and 0.70 (0.65-0.74) in the PLATO trial validation cohort and 0.66 (0.61-0.71) in the BernPCI registry validation cohort. A longer DAPT duration significantly increased bleeding in patients at high risk (score >/=25), but not in those with lower risk profiles (pinteraction=0.007), and exerted a significant ischaemic benefit only in this latter group.

INTERPRETATION: The PRECISE-DAPT score is a simple five-item risk score, which provides a standardised tool for the prediction of out-of-hospital bleeding during DAPT. In the context of a comprehensive clinical evaluation process, this tool can support clinical decision making for treatment duration.