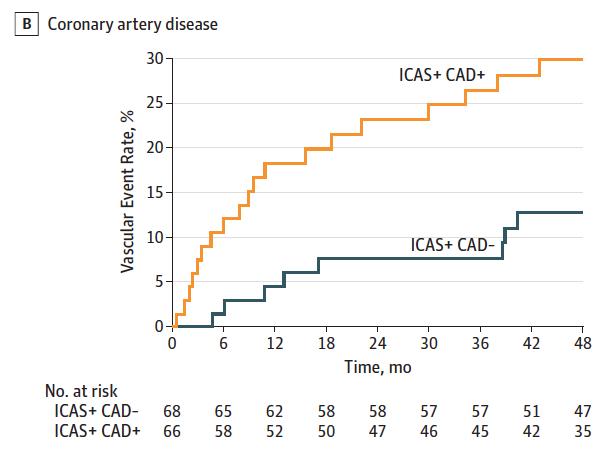 Importance: Patients who have experienced stroke with intracranial atherosclerotic disease (ICAD) may also have concomitant atherosclerosis in different arterial beds and other possible causes for ischemic stroke. However, little is known about the frequency and prognostic effect of such overlapping diseases.

Objectives: To describe the prevalence of systemic atherosclerotic burdens and overlapping stroke etiologies and their contributions to long-term prognoses among patients who have experienced stroke with ICAD.

Design, Setting, and Participants: The Asymptomatic Myocardial Ischemia in Stroke and Atherosclerotic Disease study is a single-center prospective study in which 405 patients with acute ischemic stroke within 10 days of onset were consecutively enrolled between June 2005 and December 2008 and followed up for 4 years. After excluding 2 patients because of incomplete investigations, 403 were included in this analysis.